Escape from the Planet of the Apes 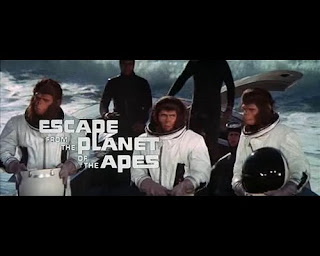 This is the third of the five original 'Planet of the Apes' movies. While the first, 'Planet of the Apes' starring Charlton Heston, is still the best, I think this film should receive more credit. This film stars Roddy McDowall and Kim Hunter. They reprise their roles as the scientist couple who aid Heston in the first 'Apes' movie. In Escape they have arrived in present day Earth (1971) and they attempt to conceal the fact that they are quite intelligent. Once humanity discovers their talents the forces of power decide they are a threat and must be eliminated. If you have seen the first films in the series you will especially appreciate the opening sequence when everyone is expecting Charlton Heston to emerge from his space craft. When it turns out to be apes, not people, things heat up!

As I have said in other posts, science fiction films can talk about subjects that other films are afraid to touch. Escape from the Planet of the Apes was made in 1971. It sends a powerful message about prejudice and stereotypes in regards to race. The danger of racism, and to a lesser extent sexism, is the true message of the film. Apes who can talk and fly spacecraft are just a vehicle for the discussion. McDowall and Hunter do their usual fine jobs as Cornelius and Zira. It must be difficult to work covered in ape makeup. Eric Braeden (see my blog for 'Colossus:The Forbin Project') plays the bad guy. He is most concerned about the effect that intelligent, talking chimps could have on society. 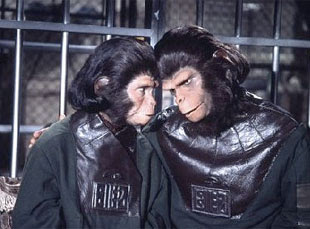 The movie also focuses some on our society's attention/worship of celebrity. Once people understand that Cornelius and Zira can speak they become worldwide celebrities. Limos, tv appearance and perks abound as they conduct a whirlwind tour. But the powers in place know that their own status at the top of the pyramid will be effected by the Apes. Therefore, they must be destroyed.

Racism, sexism and celebrity worship are all covered in Escape from the Planet of the Apes. Plus you get the fun ride of talking apes, Ricardo Montalban as a circus owner, cheesy special effects, conspiracy theory and some "fish out of water" humor. What more could one want in a cheap, sci-fi flick!

Posted by CinemaSteve at 9:31 PM