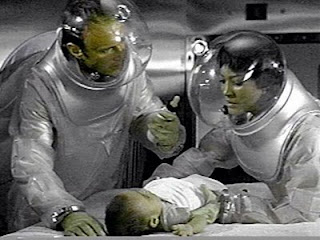 Taut. Tense. Thriller. When I went back to check on some other reviews for The Andromeda Strain, a lot of words like these filled the pages. The film originally debuted in 1971 and was quite a shock to much of the audience. Things from outer space that came to destroy the Earth were always large monsters not incredibly small microbes. You could fight a giant monster, but how could you fight a bacteria? Can you kill off this miniature life form from another planet? Should you?

This film is an intellectual thriller. There is very little in the way of explosions, car chases or machine gun shootouts. Instead a team of scientists must determine what has been killing people in a small New Mexico town. And, whatever that may be, is it from outer space? Veteran actors Arthur Hill, David Wayne, James Olson and Kate Reid play the group of scientists ordered to figure out what happened and how to stop it from spreading. All are veteran character actors with hundreds of appearances among them. They allow us to "listen in" on their discussions, arguments and research in a race against the clock to save humanity. Part of what makes this film tense is its very realistic premise and plot. I find myself believing that this is not only possible, but, perhaps, even probable.

The screenplay was written by Nelson Gidding and is an adaptation of the Michael Crichton best-selling novel. Crichton's books have gone on to become almost a dozen hit films, but this was the first in his empire. He also wrote 'Jurassic Park', 'Westworld','Congo',Twister' and many others, but this is one of his most detailed books. He was inspired to write The Andromeda Strain after listening to a lecture in medical school. It is obvious that he put in the time to work on the science for this book. It is intelligent with enough suspense and action to keep you interested. Crichton passed away in 2008 and will be missed.

This film was produced and directed by Robert Wise. A long-time veteran of Hollywood, Wise has won 4 Oscars and directed one of the great sci-fi films, 'The Day the Earth Stood Still' (see my earlier blog). He resists any temptation to rewrite this material and allows the script and actors to tell a suspenseful story. I commend him for that deft touch. We don't need explosions, actors on wires and hundreds of bodies for a film to be exciting. Give me a good script with a believable premise and I will be entertained. 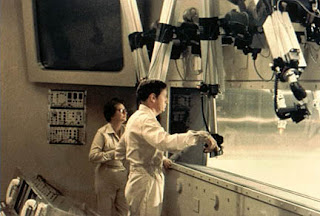 Filmed in 1971, directed by Robert Wise, written by Nelson Gidding from the Michael Crichton novel, starring Arthur Hill, David Wayne, James Olson and Kate Reid. One note:This was remade for television in 2009. The writer and director of the remake could not avoid the desire for more bodies, more action and a giant conspiracy. It does not add to the story. Get the original film and avoid the mini-series.