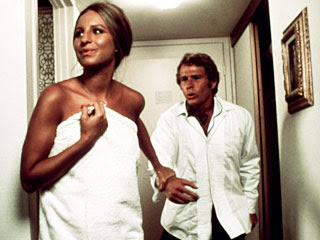 When they are well made, I enjoy screwball comedies. And this one is well made. Like all screwball comedies, the plot of this movie is wild and crazy. Ryan O'Neal plays a scatterbrained scientist who thinks that early humans pounded on different kinds of rocks to make music. Madelaine Khan, in her film debut, portrays his overbearing fiancee. They have just arrived in San Francisco to attend a dinner at which he may receive a large grant to continue his studies.

Most importantly, he is carry his rock samples in a red and black suitcase. Along the way we meet a thief with stolen, top secret documents. Those papers are in a matching suitcase. We also are introduced to a very wealthy socialite whose expensive jewelry is kept in another matching suitcase. Finally, we meet Barbra Streisand's character who, coincidentally, has a matching suitcase with her personal belongings. She has bounced from university to university searching for her place in the world. As I am sure you have surmised, the cases get mixed-up, the government is chasing the spy, criminals are chasing the jewels, the scientist needs his rocks and Barbra wants Ryan O'Neal.

The plot is zany and so is the film. There are enough one-liners to film two or three modern comedies. The script, written by Buck Henry, just keeps them coming. Add to that a wild chase sequence throughout the streets of San Francisco and there is much fun to be had by all. Director Peter Bogdanovich pushed to make this movie. He provided the outline to Buck Henry and wanted to model this film on the classic 'Bringing Up Baby'. Although the gender roles are reversed, you can feel the similarities. Bogdanovich does the Howard Hawks, Cary Grant and Katherine Hepburn classic proud. Both of these are fantastic screwball comedies!

It is the pairing of Ryan O'Neal and Barbra Streisand that make What's Up, Doc? so terrific. O'Neal plays the semi-deadpan role to perfection while Streisand provides the comic energy. Since she has not done any movies for years, I forget how talented a comic actress Streisand is. The supporting cast is terrific. You can sense from the beginning of her career how enjoyable Madelaine Khan will be on screen. Add to them Kenneth Mars, Austin Pendleton, Mabel Albertson (in her last film) and many more fantastic character actors to assemble a first-rate cast.

From beginning to end this film is funny. I have seen it 5 or 6 times and each time I enjoy the zany antics and hilarious dialogue. I hope you will as well.