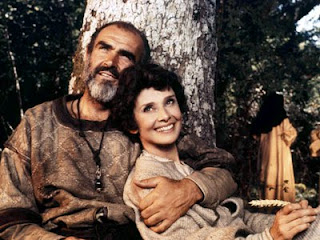 The legend of Robin Hood is known throughout the world. A litany of Hollywood's leading men have "taken from the rich to give to the poor". From the classic Errol Flynn to Kevin Costner to Russell Crowe, tinsel town's biggest stars have graced us with their own Robin Hood. And this film is no exception. Casting perhaps the biggest star of his day Sean Connery. He had already done 6 Bond films as well as 'The Wind and the Lion' and 'The Man Who Would be King' (see earlier blog). In 1976 he was one of the most recognizable people on Earth. Along with Connery this movie stars Audrey Hepburn as Lady Marian, Robert Shaw (fresh off of 'Jaws') as The Sheriff of Nottingham and Richard Harris as King Richard the Lionheart. An amazing cast of huge stars. Add to the cast the veteran director of action/swashbuckling epics Richard Lester. He directed 'The Three Musketeers', 'The Four Musketeers' and 'Royal Flash'. When you consider the cast and the director I am sure audiences expected a sword fighting epic.

What they got was an intelligent look at what happens to "heroes" as they age. All the previous treatments of Robin Hood showed him as an athletic superhero fighting for good over evil. In Robin and Marian it is 20 years after Robin and his Merry Men have saved the day and returned King Richard to the throne. Instead of fighting off dozens of the Sheriff's men with ease, Robin gets winded just climbing the castle wall. The other leading characters have all suffered similar ravages of time. They are older, less athletic and more concerned with the effects of their actions upon others and the effect of time upon themselves. Their own mortality and legacy are the questions of the day.

This concern makes Robin and Marian an intelligent film not an epic. The cast plays up the fact that they are much older. Connery especially "takes the mickey" of himself. It takes great courage, as an actor, to show Robin Hood having difficulty getting out of bed in the morning. Anyone over 40 knows that moment, at least occasionally, but Robin Hood should never suffer such indignities. I appreciate the reflection upon what happens to a hero when they get old. How do those around them act and how do they feel about themselves? As we all age those are questions that become more prominent within ourselves. 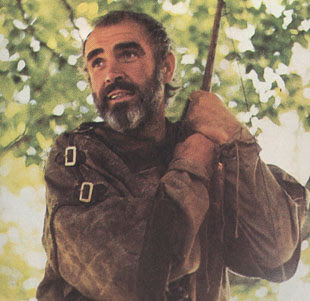 The cast is deep. Connery, Hepburn, Shaw and Harris were all stars at the time. Add to that Denholm Elliott (best known for his Indiana Jones role) as Will Scarlet, Nicol Williamson as Little John and Ian Holm as King John. There are familiar faces all over the screen. The entire cast is faced with that "how to play an older legend" question. With the direction of Lester and an intriguing script by James Goldman the experience of Robin and Marian is one of thoughtfulness and introspection. The film has a deliberate pace at times, as though Lester wanted to give the audience a chance to think.

But it is not maudlin. Goldman's script and the actors provide laughs throughout. Many come at the stars' expenses. Again, it takes courage as a film superstar to allow others to make fun of you. Too many in Hollywood (I am talking to you Sean Penn!) refuse to allow this type of humor. But here the cast seems to revel in the opportunity to have some fun!

While this movie is not an action epic for the ages, it is intelligent and intriguing. Enjoy.