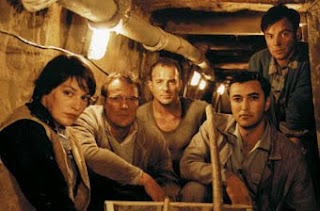 Wow! I just finished watching this outstanding movie. I am going to have to eat my words about German cinema. This makes two great German films that I have seen in just 2 weeks. As I said in my earlier blog about the wonderful 'The Lives of Others', I have had my reservations about German filmmaking. But no more. I am a convert. At least until I sit through a few incredibly slow and pointless ones! But this fantastic thriller, based upon the true story, has rocked me to the core.

The Tunnel tells the riveting, true story of an East German swimmer who escapes to the West just as the Berlin Wall is constructed in 1961. He has been in prison in East Germany earlier in his life and is a fervent anti-communist. After escaping he desperately wants to help his sister and niece reach the freedom of the West. He enlists others, some who have escaped and others who want to help, to dig a tunnel from West Berlin under the wall to East Berlin. Our rag-tag group of diggers face incredible difficulties, but, with great ingenuity, complete the tunnel. Then they have to get a group of East Germans out without getting caught.

This movie is a top-notch thriller. There is little action, at least of the traditional Hollywood kind, but I was on the edge of my seat for much of the film. Being a fervent anti-communist myself I was rooting for them from the word go! The tension builds throughout the film until you almost explode from the pressure. The fact that the movie is fairly accurate to the history just makes it more exciting. 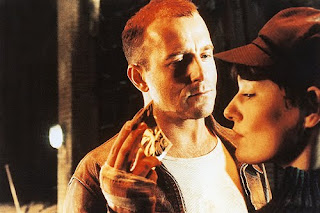 Even though this was originally made for German television and is over two and a half hours, the script is compact and moves along. The details of building a tunnel, without getting caught, over 450 feet between countries is outstanding. The director, Roland Suso Richter, does a terrific job. I could almost feel the mud as they built the tunnel. The cast contains many of Germany's finest. Sebastian Koch, who was so good in 'The Lives of Others', is fantastic here. Leading the film is German action star Heino Ferch. He does a wonderful job. Also working their magic are German veterans Nicolette Krebitz and Alexandra Maria Lara. They may not be well-known in the U.S., but they can't go for coffee without being mobbed by fans in Germany.

Even though Der Tunnel was made for television it feels like a big budget spy/escape movie. It is well-made, intelligent and intense. I felt like I helped dig after watching this terrific film!