The King of Kong 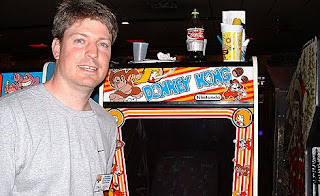 For the last few years friends had been telling me to watch this movie. Since it is about a couple of video gamers attempting to break the Donkey Kong world record, I didn't think it would be interesting. Boy, was I wrong! Director Seth Gordon has made a fantastic film that is entertaining and inspiring. From the subject matter I had thought this film would be all geeks and little compelling story or characters. Instead I found real human beings with hopes, loves and aspirations. Perhaps, sometimes, we quickly place people into stereotypes. This documentary helped remind me that everyone is unique and has some story to tell.

The film focuses upon the efforts to break the world records in different classic video games. Gordon edits the film to make it a classic good vs. evil storyline. Steve Wiebe, a teacher from the Seattle area, buys a Donkey Kong game and puts it in his garage. He then focuses way too much time and energy into becoming the world's greatest by breaking the longest standing video game record. That record is held by Billy Mitchell and has been in place for 25 years. When Wiebe finally breaks the record he sends in a tape of the effort to be certified by Twin Galaxies. They are the "official" guarantor that world records are real. Upon certification Wiebe becomes a bit of a local celebrity. But then the intrigue begins. Charges of "cheating" come in and his record is revoked. He then begins a quest to clear his name and recapture the world record. 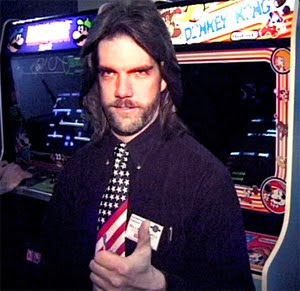 Billy Mitchell, in the role of the bad guy, is terrific. Quoting every Tony Robbins cliche about success and motivation, he refuses to meet Wiebe nor face him in a live event. He lives behind his "champion" facade and puts down those who question him. The film's focus upon this "clash of the titans" is an excellent choice. While many of the people in this film have some element of geek or nerd, the story of a science teacher battling the gaming establishment is straight from mythology. Only the type of battlefield separates it from Perseus vs. Medusa. But Mitchell shows his human side as well. He helps an 80 year old woman from Florida continue her quest to become the world record holder in Q-Bert. Good for you Doris! Mitchell also appears to be a successful businessman with a line of hot sauces and a restaurant. Not bad for a game "nerd".

There are many interesting characters. Along with everyman Wiebe and establishment Mitchell, the staff at Twin Galaxies is a study in dedication. They have been certifying world records in video games for decades for no money. Just the love of gaming and the quest for perfection. When the founder gets a call from the Guinness Book of World Records asking them to be the official arbiter of video games I was excited for them.

The King of Kong is edited wonderfully and directed with an easy, flowing style. Please don't let this warm and uplifting documentary's video game subject matter keep you from enjoying this film. I did to my detriment. I am glad I finally enjoyed this terrific film.

Filmed in 2005-2007, directed by Seth Gordon. There are new events in this story since the release of the film. Drop me a line at stevethemovieguy@gmail.com if you want the update.