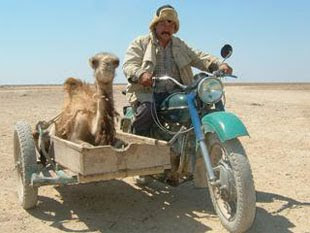 This is the first film from Kazakhstan I have seen. And, no, Kazakhstan is nothing like Borat says it is. Tulpan shows life for the working-class farmer on the Steppes of Central Asia. Life is difficult for these people. There are few resources, little to do but work and a disconnection from the rest of the world. But these people are hard-working individuals who long for a better life for their children. Sounds like just about everybody?

Writer/Director Sergei Dvortsevoy got his start in documentary film. It shows here. The shots of the Steppe and the farms therein play like a National Geographic special. The region is little seen here in the west. I don't remember ever experiencing the life of a Central Asian farmer before this film. Dvortsevoy does a wonderful job of sharing the family's life with us. The 3 adults and 3 children all share the one room yurt. (I don't remember a yurt in any other film either!) They are all involved in the workings of the farm and the children have a most interesting life. The shots of the littlest boy riding his stick "horse" with such glee are playful and fun. But life on a farm, any farm, is lots of hard work. Tulpan gives us a fascinating close-up of that lifestyle. 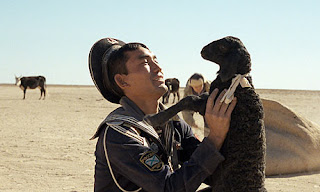 This movie has been an enigma for audiences and critics. It won a special regard at Cannes, the Golden Peacock in India and was named best film in both Tokyo and Zurich. Others thought the film was long and lacking in structure. Both views have merit. The film is a slice-of-life. It shows the joys, endeavors and sorrows of a small family in Kazakhstan. But it is also inspiring and hardworking. A little something for everyone. Also, as this film made the circuit around the world at film festivals, it became known as the "live-sheep-birth" movie. One of the major plot points is the dying of all the newborn sheep on the farm. The lead actor, who has been struggling to find his place after returning from the Russian Navy, assists a sheep in giving birth. It is messy, but also a major moment in the story. That kind of visual image is definitely memorable. For me, the most poignant sequence is when a veterinarian comes to check on the sheep. He rides a small motorcycle with a sidecar. That sidecar contains a young, sick camel. The mother of this young camel has followed the vet for almost 100 kilometers. The callings of the baby for its mother and the determination of the mother to stay with its child is a universal response with which anyone can relate. 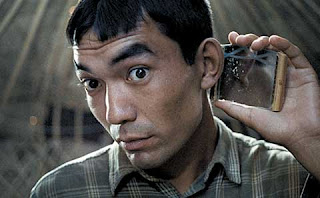 This is a film that requires a desire to learn more about a region and people who have not been showcased much outside of Kazakhstan. If you are intrigued and want to learn more Tulpan is definitely a film for you. There is a wonderful moment where the lead character looks out from his old tractor and says "see how beautiful". The camera then pans out to a dry, dusty wasteland. But to the people who live, love and die there, the steppes of Kazakhstan are beautiful. Just like home is to almost everyone!