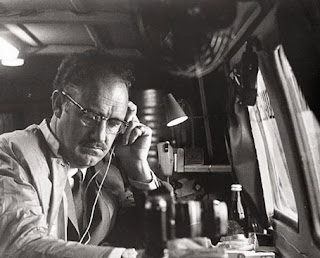 This is an odd and intriguing little film. Written and directed by Francis Ford Coppola, The Conversation was his project immediately following 'The Godfather'. While 'The Godfather' was massive, in both scale and success, this film is much more intimate. There is a small cast, simple sets and very little in the way of "action". This movie is very cerebral and is driven by the script and the excellent performance of Gene Hackman. Hackman portrays Harry Caul. Caul is a surveillance expert that has been hired to record an "unrecordable" conversation.

Two people spend their lunch break walking throughout a crowded city park. They never sit down, separate from each other nor allow anyone to get close. Caul has to hire a number of people to be able, with great difficulty, to record their discussion. Why are these people being watched? Are they criminals, cheating spouses or victims of a personal invasion of privacy? What are they talking about? How will this conversation effect those around them?

The job is a difficult one and it takes Caul a lot of work to piece together what was said. Upon finishing the tapes he attempts to deliver them to "the director" (his client). The director's assistant will not allow Caul to deliver the tapes directly and attempts to intervene. Unhappy with the situation, Caul refuses to hand over the evidence and keeps the tapes for himself. Earlier in his career Caul produced some evidence that lead to the death of an innocent family. This has plagued him to this day. His paranoia/guilt has wrecked his life and made it impossible for him to have any personal relationships. He becomes convinced that some nefarious activity is about to take place and is torn on how to become involved or if he even should become involved. At some points he even wonders if what he is seeing is true or delusion. 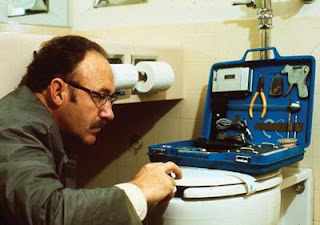 I won't say anything about the last third of the movie. Once you watch, please feel free to drop me a line (stevethemovieguy@gmail.com) and let me know what you think happened. The ending of The Conversation has been discussed in film schools, cafes and living rooms since its debut. Also, the film has a haunting jazz score. Composed by David Shire, the score is also featured in film schools for its effect upon the viewer. It is both integral to the film and non-invasive for the viewer.

This movie is small and intimate. We learn a great deal about Harry Caul as a person and about "eavesdropping" as a profession. Even though this film is 35 years old it is still impressive to think about the ability of others to spy upon us. Do you have any secrets you wish to keep? It may not be possible!

The Conversation features a top director in Francis Ford Coppola. He also wrote an interesting script. The cast is superb with Gene Hackman leading the way. The movie builds, slowly exposing the conversation along with the characters to keep us involved and intrigued through a unique ending.

Some trivia: The opening sequence involves a mime. That mime is Robert Shields, best known as part of 'Shields and Yarnell'. He was actually working as a street mime in that park at the time of the filming. Both Coppola and Hackman consider this to be their favorite of all the films that either have made. Coppola was nominated for the Best Original Screenplay Oscar. He lost out to Robert Towne for the fabulous 'Chinatown'. Use this link to read my earlier article about 'Chinatown'. The film was nominated for Best Picture, but lost out to another Coppola film 'The Godfather Part II'. It was a good year for Francis Ford Coppola!
Posted by CinemaSteve at 6:00 AM