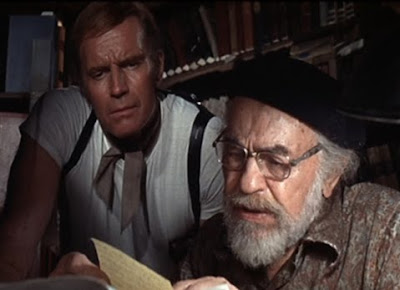 I wore my new Soylent Green T-shirt today. This is the second time that I have worn this shirt and the response is amazing. Every where I stopped someone came up to me to ask about the shirt or to comment about the movie. As my family and friends know, I am a bit of a T-shirt collector. I have about 80 in my closet right now. All have logos of interesting places I've been, things I've seen or movies I love. But of all the hundreds of specialty shirts I've worn over the years, this one has garnered the most interest by far. I find it surprising that a nearly 40-year old film, and a cheesy sci-fi one at that, is the thing that encourages people to talk about their experience of cinema. Obviously, something struck a chord within the viewers of Soylent Green.

Soylent Green stars Charleton Heston as police detective Thorn in New York City in 2022. The city is the home to more than 40 million people. The entire planet is overcrowded, underfed and out-of-resources. People are sleeping in the streets, rioting for food and desperate for any and all of life's necessities. He is charged with investigating the murder of a high-ranking executive in the Soylent Corporation. Soylent has recently introduced a line of amazing food products, of which Soylent Green is one. The nearly starving planet eagerly stuffs their faces with the new items. The Soylent Corporation has told the world of a new source for food in the oceans and they are making huge fortunes selling the foodstuffs. 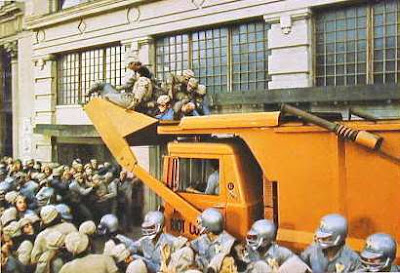 Dt. Thorn shares an apartment with a researcher named Sol, aptly portrayed by Edward G. Robinson. This is the last film in Robinson's illustrious career. Sol and Thorn are lucky to have a place to live. Most people are sleeping on the street, in stairwells or worse. Sol's research leads him to find important clues in the death of the executive. But Sol longs for the days when food was real, it tasted like something and could be obtained simply by going to the store. There is a touching moment when Thorn shares some strawberry preserves with Sol. Sol is so happy to enjoy something so wonderful and yet even more depressed at the thought of what Earth has become.

No spoilers here. I am sure that almost everyone has seen the film, or one of the many references to it with modern pop culture. But, just in case, I won't give any details. If you have not seen Soylent Green, do yourself a favor and get it. There is a collective experience with which you are not connected.

The release of this film was only a few months after the initial report 'The Limits to Growth' from the Club of Rome. Issued in 1972, this report foretold of the coming apocalypse for the planet. The Club of Rome insisted that there were too many people using too many resources and that Earth was headed for destruction. Almost every "fact" that the report used was distorted and every one of their predictions has yet to happen. Yet millions of people still believe that we, as a species, are destined to hunger, disease, overpopulation and over consumption of all resources. It is almost 40 years since their report and the only places on Earth where people are starving are where citizen's own governments prevent the movement of foods. There is enough food on Earth to feed every human being. The Club of Rome continues to issue reports predicting our imminent demise. They have been doing so for 40 years and will continue to do so for 40 more. You must choose between despair and malaise or a belief in the basic goodness of people and our ability to adapt. I choose hope over despair. 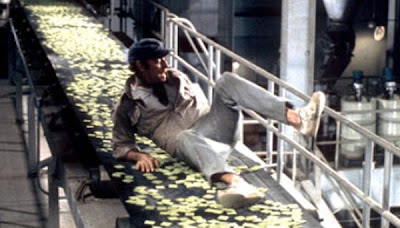 The film is based upon the novel 'Make Room! Make Room!' by Harry Harrison. While the setting is the same, the film is very different from the novel.
Posted by CinemaSteve at 11:55 AM