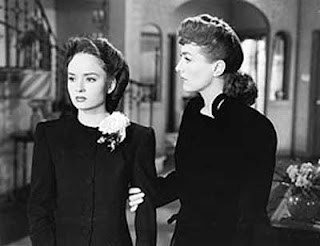 As frequent visitors know, I love film noir. I enjoy the mystery, relish the dialogue and the visit to the dark side of humanity makes for good viewing. Mildred Pierce is both a classic of film noir and a pioneer. It has all the elements that make for classic noir. It has the seduction of a good person by an evil woman. That good person then descends into a life of crime and destruction in an effort to obtain or keep that woman. That descent over to "the dark side" gives noir its biting truth. Eventually the piper must be paid for all this darkness. And in Mildred Pierce that darkness includes murder.

But this movie is also a pioneer. The protagonist in film noir is, usually, a man being seduced by a beautiful woman. Here it is a woman descending into crime and manipulation for the love of her own daughter. Mildred Pierce struck a blow for feminism long before it became a popular movement. There were strong women in films before this one, but not in film noir. Noir was reserved for leading men. Studios felt that audiences would have trouble with a woman leading a dark movie. But they were wrong. This movie was quite successful at the box office and won a Best Actress Oscar for leading lady Joan Crawford. The fact that 3 vital roles were all played by women is important in film history. This film showed that no parts should be off-limits for women and that audiences will appreciate a well-made film no matter the gender of its leading actors. 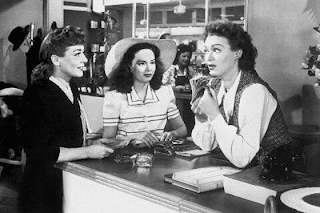 Based upon a novel by leading noir writer James Cain, Mildred Pierce tells the story of a woman that will do anything to please her daughter. Of course, this indulgence of a young woman has lead her daughter to become quite spoiled and selfish. All discussion of this movie inevitably leads to how much the viewers hated Veda (the daughter). She is portrayed, with wicked smugness, by Ann Blythe. Blythe was nominated for a Best Supporting Oscar for her terrific performance. Anytime you can get the audience to despise you as much as they did Veda, you know that your performance is top-notch. Eve Arden is also wonderful as Mildred's friend/business partner Ida. Her dialogue, in usual Eve Arden fashion, is biting and satirical. She too was nominated for a Best Supporting Actress Oscar. But it is Crawford that carries the film. She deserved the Oscar, beating out some of the titans of her age like Gene Tierney, Greer Garson and Ingrid Bergman.

Classic film noir, wonderful writing and acting and a strong blow for women actors. Revel in the wonder that is Mildred Pierce.

As I said, I love film noir. Previously, I wrote a piece about my favorite 'Double Indemnity'. 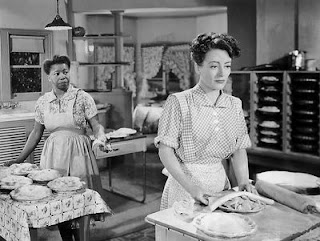