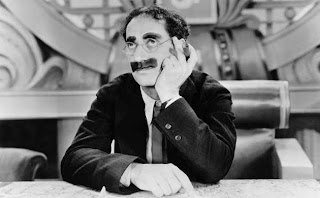 Anarchy. It is the only word to describe the Marx Brothers. You either love them or hate them. Just like with all things uncontrolled, there is no middle ground. Personally, I appreciate anarchy. Ever since I was a kid I enjoyed the unstructured life. And I deeply appreciate the Marx Brothers. The constant sarcasm and in-your-face one-liners are fantastic. If you are looking for a coherent plot or linear storytelling, skip this movie. It is 68 minutes of sarcasm, jokes and anarchy.

Duck Soup has the thinnest of plots. Rufus T. Firefly (Groucho) is appointed Head of State of Freedonia. He decides that war with the neighboring country of Sylvania is needed. Chico and Harpo play spies that constantly switch sides. Zeppo, the "fourth" Marx Brother, portrays Firefly's aide. This is the last of the films in which Zeppo appears on screen. The point of the film is to provide each brother their opportunity to wreak havoc upon the audience. No moment is too precious to escape the jokes, insults and/or sarcasm. Politics, romance, movie musicals, government and war itself are all insulted and ridiculed at one point or another. Looking back, many critics reference Duck Soup for its anti-establishment humor. The Marx Brothers used this film to satirize European Dictatorships, Western governmental policies and all forms of authoritarian regimes. They were so effective that Mussolini banned this film in Italy. Groucho is later quoted as saying he just wanted to make a funny movie and that they had no plan to make some grand statement. I think both attitudes are true. The Marx Brothers did seem to want to make "just a funny movie", but they did so by poking fun at so many of the troubles of the 1930s. 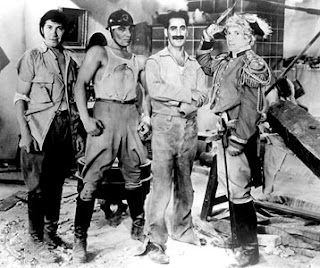 One other bit of information that I find intriguing. Duck Soup was released in 1933 to critical disdain and was a bomb at the box office. Now, almost 80 years later, it is listed in most of the greatest film lists. It is hailed as "satiric masterpiece" and "quintessential Marx Brothers". The brothers just wanted to make a funny movie and, initially, were most disappointed with the public reaction. This film was, at first, a total flop. But by now I am sure that they would be proud of the movie and how the audience has connected with the message and humor of Duck Soup. 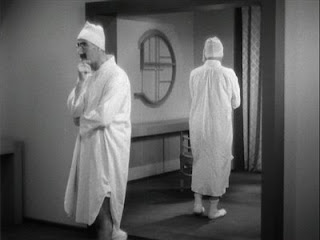 There are a few scenes in this film that have been copied many times. The most famous of which is the "mirror" scene. In this scene, Harpo has broken a mirror and attempts to mirror the image of Groucho move-for-move. Harpo later recreated this scene on 'I Love Lucy', but with the roles reversed. On the tv show, Lucy attempts to mirror Harpo. Also, classic jokes that have been repeated millions of times find their fame in this film. Lines like "any four year-old could understand this report. Go out and find me a four year-old because I can't make heads or tails of it." That joke has been used, in one form or another, in movies, tv and on stage ever since.

Filmed in 1933, directed by Leo McCarey, written by about a dozen people, starring the Marx Brothers.
Posted by CinemaSteve at 5:00 AM