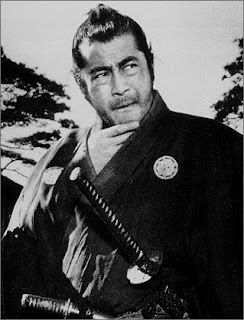 Japanese writer/director Akira Kurosawa deserves, and receives, a great deal of acclaim for his many wonderful films. Critics around the globe celebrate 'Rashomon' or 'Ran' as his master work. But I find this simple, amusing tale of a samurai at the dawn of the age of guns to be his most enjoyable film.

Yojimbo, or The Bodyguard, is the tale of a samurai in Japan, circa 1860. The era of the samurai is over and he now has no path in life. The dynasty has been overthrown and guns and trains are replacing swords and foot traffic. Kurosawa's leading man Toshiro Mifune stars as a man with no name. If that sounds reminiscent of Sergio Leone and Clint Eastwood in 'A Fistful of Dollars' it should. Leone's film is an homage to this fabulous film. Much of the style, pace and feel of the Leone westerns comes from Kurosawa. And Kurosawa was greatly influenced by American Westerns and pulp detective novels. 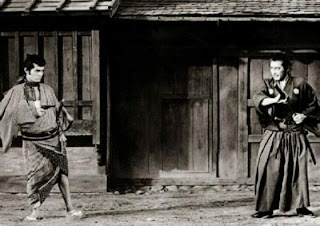 Mifune's man with no name throws a stick in the air and walks in the direction that it points upon hitting the ground. He comes across a town within which two rival factions are fighting for control. Control of all the illegal and illicit, but highly profitable, activities within the village. Mifune decides to play each side against the other for his own gain.

While Yojimbo is a samurai film, this film has more humor in it than most Kurosawa films. Mifune has a running gag in which he finds it necessary to scratch. By the end of the film I felt like rural Japan must by the most "itchy" place on Earth. Kurosawa also uses unique actors with different physical looks and characteristics to add to the film. Some of the most interesting, different and challenging people can be found in this little town.

This movie is straight-forward in its storytelling. No superfluous action nor dialogue to clog the message. It is a crisp film that can be enjoyed by all.

Filmed in 1961, directed by Akira Kurosawa, written by Kurosawa and Ryuzo Kikushima, starring Toshiro Mifune, Tatsuya Nakadai, Takashi Shimura and Atsushi Watanabe. For more info on some other great Kurosawa films, here are links to my posts about 'The Bad Sleep Well' and 'Dersu Usala'. Not only was this film redone as 'A Fistful of Dollars', but Bruce Willis stars in a version entitled 'The Last Man Standing'. 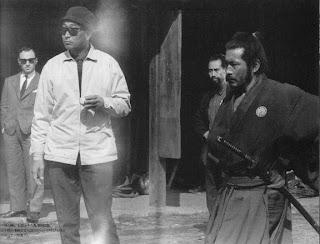 Posted by CinemaSteve at 1:07 PM