This article refers to the wonderful 1968 comedy and not the horrific 2005 movie based on the musical. 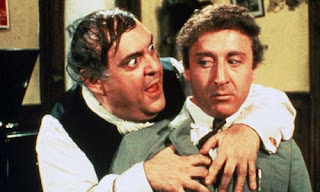 Gene Wilder and Mel Brooks teamed-up to make the greatest comedy team of a generation. This was their first collaboration. They followed this comic masterpiece with 'Blazing Saddles' and 'Young Frankenstein'. All 3 came out within a few short years. I challenge anyone to find a comic pairing with 3 better films in a row.

The Producers follows a down-on-his-luck Broadway producer, portrayed with absolute comic genius by Zero Mostel, who makes his living by bilking elderly woman out of their fortunes. Max Bialystock (Mostel) produces plays that are awful and which quickly close. He keeps most of the production money and no one wonders what happens to their investment. After all, the play bombed. Of course we all lost our money. Into his world comes accountant Leo Bloom. Bloom, admirably played by Gene Wilder, is to audit the accounts of Bialystock. Bialystock knows he is doomed. He has cheated his investors and is about to be caught. It is time for one last, desperate gamble.

What if the accountant and producer work together? With Bloom auditing the books the investors will never know of the cheating. And if Bialystock can find the worst play ever written, a sure bomb, they can sell thousands of investors ownership in the production. So what if they each get 50%, 75% or even 100% ownership. The play is going to fail, miserably. Great fortunes are for the taking! Bloom can't resist the idea, especially with Bialystock's cajoling, and the two are off. Off in search of the worst play ever. 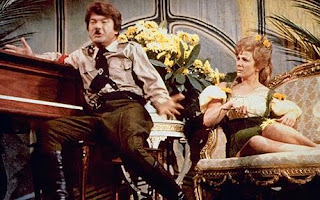 From there the film follows the story of finding, casting, producing and the opening night of this worst play. This is madcap, zany antics. The cast is horrible, the director terrible, and the script is even worse. We meet many characters along the way. Kenneth Mars, as the script's author Franz Leibkind, and Christopher Hewett, as the show's director Roger de Bris, excel. This kind of setting allows actors to go way over-the-top. And both of these veteran character actors take full advantage of the opportunity. Also, look for supporting appearances by Lee Meredith and Dick Shawn.

But it is the comic genius of actors Zero Mostel and Gene Wilder, along with writer Mel Brooks that propel The Producers from zany comedy to cinema masterpiece. I find the film fun and funny every time I watch it. And that has been about 20 times. I still enjoy the jokes after all these viewings. I am sure you will too!

The story is that, after finishing the film, the studio would not release The Producers. At the time it was called 'Springtime for Hitler' and the title and film were found to be offensive not funny. Peter Sellers saw the film at a private screening and twisted the arms of the studio executives. He felt the film needed to be seen. But it was only after the title change that the studio would eventually, reluctantly allow the film to be seen by the public. They were lucky to have been convinced to change their minds. The film was a financial success and the studio made millions.
Posted by CinemaSteve at 5:00 AM