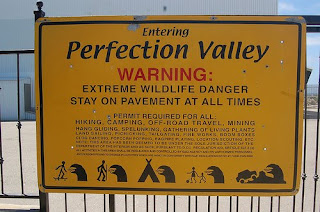 I grew up watching 'B' movies on tv. The sci-fi and monster films of the 50s were regular guests on the 13" black and white television in my room. 'War of the Worlds', 'Invasion of the Body Snatchers', 'The Thing' and 'The Day the Earth Stood Still'(see my review) are still preferred viewing at my house. Tremors is a 1990 version of a 50s monster movie.

Excellently cast Kevin Bacon (Valentine) and Fred Ward (Earl) play two independent "businessmen". They are basically day laborers looking to make a dollar any way they can. Preferably the easy way. They live in the middle of the desert in a very small town. Very small. One day, while on the prowl for a quick buck, they discover a rancher who has died a grizzly death. This leads them on the run from giant worms that devour everything in their path. Just like every 'B' movie ever made, the plot is simple and just a device to introduce the monster. The argument over what to call the monster is fantastic.

In an inspired casting move, Michael Gross, who played the Dad on 'Family Ties', and singer Reba McEntire are cast as gun-toting, right-wing survivalists. They provide a great deal of ammunition. For the story they provide the ammunition used to hunt the monsters. For the viewer the casting of Gross is a joke in-itself. His work on 'Family Ties' as a very liberal PBS employee is wonderfully contrasted by his survivalist in Tremors. Watching them discuss which huge gun and explosives to use is priceless. 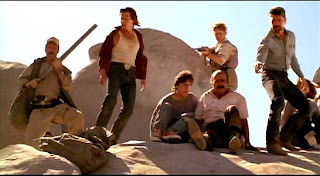 Tremors features a limited amount of actual violence. Just great characters and a monster that is out to get them. Great fun can be had by all!