This film is powerful. If you have not seen it, rent it or netflix it or buy it. But don't read this blog entry until after you have seen the movie. 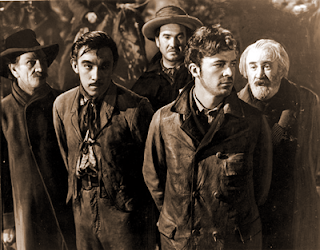 The Ox-Bow Incident is one of the greatest commentaries on social justice I have seen. The story is strong, the acting top-notch and the film making perfect. It is crisp with no secondary stories, no Hollywood endings nor any romance "for the ladies". Just a moving script that should make every viewer question their own actions and morals. There is a saying "all that is necessary for evil to triumph is for good men to do nothing". Edmund Burke was never shown to be so accurate as here. Viewing this movie always leaves me with questions. Questions of my own actions, questions of society's morals and questions about our collective future. Do "good men" do enough to assuage evil? Usually, eventually, yes. But, sometimes, I doubt it.

Director William Wellman had to shop The Ox-Bow Incident to every studio in Hollywood. He had been turned down by everyone except Fox. A few years earlier he had a fist fight with Mr. Zanuck, the then head of Fox. Wellman had sworn to never speak with Zanuck again. But his interest in telling this poignant story forced him to overcome that reluctance, swallow his pride and go pitch the film to Fox. Zanuck, like all the other studio execs, felt that this would be a big money loser. It was made in 1943 in the midst of World War Two. No one wanted to make a movie in which innocent people were hanged. So Zanuck required Wellman, a very profitable director, to make two other films for Fox to get the money necessary for this film. Wellman instantly agreed. And my personal thanks, as well as those of countless movie lovers, go out to both of them. 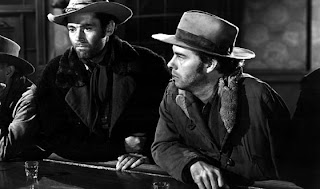 Henry Fonda and Harry Morgan play two roving cattleman who wander into town. After they arrive news is received that a very popular local rancher has been murdered. The townspeople quickly form a vigilante posse to "go after the murderers and string them up!". A local businessman attempts to talk them out of the lynching, but the group can not be stopped. They chase after the people they believe are responsible for the rustling and murder. The mob soon catches up with 3 men. Dana Andrews gives one of the performances of his career as the leader of these men. The mob is certain that these are the criminals and that they should be hanged. Immediately. A few men, lead by Harry Davenport as the shopkeeper, attempt to stop them. But to no avail. The three are eventually hanged.

Again, if you haven't seen the film, don't read further. With their blood lust satisfied, the lynch mob rides for home. They are met by the sheriff who want to know what has happened. The posse explains their "bringing to justice" the three hanged men. The sheriff explains that the local rancher was not murdered and that the men who attacked him are in jail. The people who the mob just killed weren't criminals, but innocents. As they had said all along. The posse is left to question their own actions with the threat of imminent arrest, prison or death sentences awaiting. The leader of the 3 innocent men had written a letter to his wife before his death. The reading of this letter, by Henry Fonda, is one of the more touching moments in cinema. It takes an everyman actor, like Fonda, to represent all of us on screen. Fonda's character did not want to hang the men, but he felt there was nothing he could do. He stood by. Could he have done more to save innocent lives? That question is left to the viewer. Rightfully so.

One final note. The studios were right. This film was an immense failure at the box office. No one wanted to see it. But it was a critical success and lives on now almost 70 years later. At a screening Orson Welles told Harry Morgan that the audience had no idea what they had just witnessed. It was too powerful to be taken-in quickly.
Posted by CinemaSteve at 2:46 PM