Joan Rivers A Piece of Work

This film is currently in theatres. Go see this terrific documentary before it disappears. 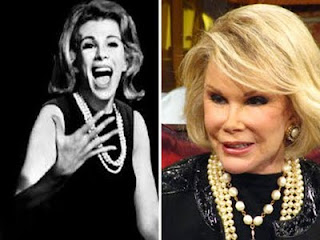 Wonderful documentary about a year in the life of Joan Rivers. Ms. Rivers is best known today for her jewelry lines on QVC and her red-carpet work. But for over 40 years she has been a ground-breaking comedienne. She is very talented, hard-working and freakin' funny. I am old enough to remember her from 'The Tonight Show with Johnny Carson'. As a youngster I was much more interested in her hosting the show than Carson.

This film follows Rivers for a year. We see some of her triumphs and setbacks with what seems like unlimited access. The documentary makes two points that resonate with me. One, she works hard! She is always looking for gigs. Her assistant points out that Rivers is depressed if she has a day with only one event. She likes to have 3 or 4 jobs every day. Two, Rivers is under appreciated for all the work she has done. She was one of the first women who made their mark in the world of stand-up comedy. Kathy Griffin explains this very point in the film.

The movie shows her doing her comic work and her personal/business life. Both are interesting. Go see this terrific documentary. On a personal note:I was, by far, the youngest person in the theatre. Hopefully some younger viewers will take in this film.

Posted by CinemaSteve at 9:48 AM