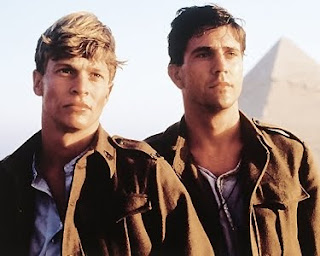 I found I had a great deal of difficulty getting to sleep after watching Gallipoli. Director Peter Weir did such a magnificent job of bringing me into the story of young men caught up in a national passion for war that I found myself restless, almost upset. The characters in Gallipoli come to find that a national fervor does not always look-out for the interests of the participants. Many men and women have suffered in the name of national pride.

Mel Gibson, in one of his earliest roles, and Mark Lee portray two young men in Australia in 1915. Lee plays Archy, an underage volunteer desperate to fight for his country. Gibson plays Dunne, a man from the city who wants to avoid the conflict. Both are world-class sprinters who meet on the race track. They build a friendship as Archy tries to enlist even though he is too young. Archy eventually convinces Dunne to enlist with him. Dunne forges a new birth certificate and they attempt to join up. The "Light Horse", Australia's cavalry, only want Archy and the two are separated. Archy goes off to Egypt to train to fight in Turkey. Dunne joins the infantry and the two are reunited in Egypt. They join forces and are sent to the Gallipoli Peninsula to fight the Turks.

Director Weir really makes two films. The first is a sweet and endearing coming of age, buddy picture. The camaraderie between Archy and Dunne develops and I feel almost like one of the gang. Weir's second film is about the horror that is war. In this case World War One. The true story of Gallipoli is considered to be one of the great tragedies in Australian history. Thousands of young Australian men met their death 5,000 miles from home to almost no result. Director Weir brings home the day of greatest tragedy in gut-wrenching fashion.

Film teachers and critics make much of the final, freeze-frame shot of Gallipoli. It is quite a powerful ending. But I find that the picture of abject frustration and horror on the face of Gibson to be the film's finest moment. His look brings home the Gallipoli tragedy in a very personal way.

Filmed in 1981, directed by Peter Weir, written by David Williamson, starring Mel Gibson, Mark Lee, Bill Kerr and Harold Hopkins. The screenplay is adapted from a book, 'The Broken Years', by Bill Gammage. The book is out-of-print.