Das Leben der Anderen (The Lives of Others) 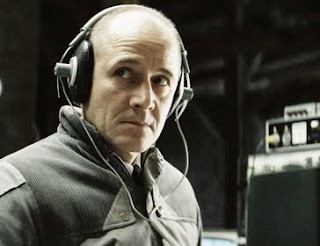 An oxymoron is a figure of speech that has incongruous parts. Like "jumbo shrimp" or "pretty ugly". I am about to use an oxymoron that I never thought would become a part of my vocabulary. This film is a Good German Movie. I have used many adjectives to describe German cinema. Boring, slow, dull, long, obtuse and odd are the first ones to come to mind. But I can not remember the last time I uttered the phrase Good German Movie. But this film deserves all the kudos that I can offer. While I must admit that the pacing is a little slow in the opening the film is intelligent, well-written and interesting. I wanted to know what happens. That is the highest praise that anyone can say about a movie.

This film is set in 1984 in the Communist nation of East Germany (GDR). Ulrich Muhe plays Wiesler, an employee of the domestic spying agency Stasi. He has been instructed to gather damning information about an author (Sebastian Koch) and an actress (Martina Gedick). He is confident that he will find out all their secrets. But, as his spying continues, he finds himself becoming quite interested in The Lives of Others. He begins to empathize with their plight as he listens to topics of conversation and actions that are forbidden to him. He is faced with difficult decisions in his role as spy. As was all too common in East Germany, nothing good can come from such a situation.

I am not the only one who enjoyed The Lives of Others. The film received the Academy Award for the 2007 Best Foreign Language Film and received the most nominations in German Film Award history. It also won the Cesar (France) Best Foreign Film award, the Silver Condor from Argentina, the Grand Prize in Brazil, the Best Film at the European Film Awards and about 50 other major prizes from around the Globe. Das Leben der Anderen is from writer/director Florian Henckel von Donnersmarck. While his name is quite a mouthful (as almost all words in German seem to be) the film is quite compact in its use of language. The script has little superfluous language and relies upon the viewers involvement in the story to carry the film forward. I found myself wondering what was going to happen and how this situation could be concluded without intense suffering and depression. I will not "spoil" anything by giving details, but the ending of this film is most intriguing. 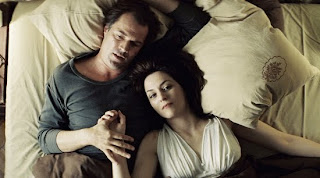 Director von Donnersmarck does a wonderful job with lighting and costumes. The Stasi spy is shown primarily in greys while the artists have color and warmth in their lives. He also gives us a taste of what life under the communist thumb could mean. In one scene an innocent joke turns into a terror-filled moment for the comedian as his superiors overhear the joke. This must have been a constant pressure in the East for the almost 50 horrible years of oppression.

An interesting tidbit: All the listening props are actual Stasi equipment on loan from collectors and museums. The actual "bugs", recorders and other spying equipment were used to provide authenticity. The prop master himself spent two years in an East German Stasi prison. He insisted upon the authentic machines being used. Even the letter steamer, which can open up to 600 letters per hour, was the type used by the East German spy agency.

The film does have a "European" style and pace. If you need action at all times this is not the film for you. And the film is in German with subtitles. But I suggest to all my readers to see this movie. It provides a fascinating glimpse into a terrible situation. I am so glad to live in the U.S.A.