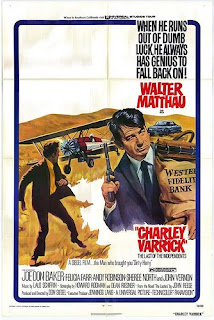 This is a great guy movie. Charley Varrick (Walter Matthau) and his friends decide to rob a small town bank. After the robbery they discover that instead of splitting small proceeds the bank was full of cash. His partners are thrilled with the big score, but Varrick knows that it must be Mob money. And he doesn't want the mob after him. Soon both the Mob and the Cops are busy trying to locate Varrick and his partners. The Cops want them in prison and the Mob wants them dead. Varrick has to try to find a way out of the mess.

I love the build-up to the big-climax ending. Extremely satisfying as pressure builds. You don't know how, or if, Varrick and friends can extracate themselves from this mess. Matthau is fantastic as a classic anti-hero. I never thought of Walter Matthau as a guy's leading man, but his everyman quality really brings the tension home. Joe Don Baker, as the mob hitman sent to find him, does the acting of his career. Creepy and relentless he provides the pathos for Charley Varrick.

Director Don Siegel moves this film along crisply. That is a trait that I appreciate in directors. He provides an excellent pace and quite the finish. Howard Rodman's script from the John Reese novel is tight. Again, just the way I like it. I root for the "bad guys" all the while wondering how on earth they can make it. That is the essence of an anti-hero movie. Charley Varrick fits the bill.

Important Warning: The DVD of this film is a "cropped version". You only get about 70% of the picture. The company that released it cut off the sides to make it fit a tv screen. They should have letterboxed it, but did not.