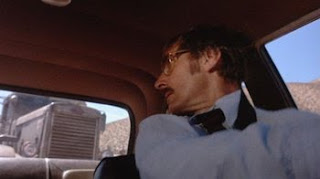 It is amazing how much suspense you can build with almost no dialogue or sets, just a car and a very menacing truck. This is the film that turned Steven Speilberg from a tv director into a wanted filmmaker. Dennis Weaver stars as a mild-mannered traveling salesman. Driving along a small, California two-lane highway he decides to pass a large truck. No big deal. Happens a million times a day, right? This time the trucker does not appreciate the action. The trucker decides to chase down Weaver. The ultimate in road rage!

Spielberg's storytelling mastery shows. In a stroke of genius we never see the truck driver. It is just a beat-up truck chasing down poor Dennis Weaver. Spielberg later uses this same technique, to great effect, with the shark in Jaws. Of course, with Jaws, the shark didn't work correctly, but why quibble? In Duel Spielberg tells the story with a minimum of effects, dialogue or explanation. Just a rogue truck chasing down our unsuspecting lead. Suspense builds until a satisfying final scene.

Duel was written by Richard Matheson. He is now best known as the author of 'I Am Legend'. He also wrote one of the scariest things I remember from my youth. 'The Trilogy of Terror'. Pick that one up too if you can find it!

Simple, straightforward and powerfully suspenseful. I find Duel to be quite satisfying as well!