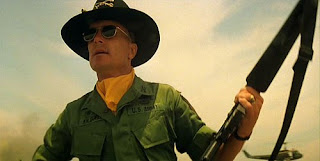 The filming and production of Apocalypse Now is as much an epic as the final film. A typhoon destroyed all the sets, Martin Sheen has a major heart attack in the middle of filming, Harvey Keitel is replaced as the lead, Marlon Brando refuses to cooperate, the Philippine Army yanks all the helicopters, and Coppola has to put up his own money to see the film finished. A 100 day schedule balloons into 238 days of intense filming.

Most intriguing is the parallel between the script and Coppola's experiences filming. His own self-doubt and the constant strain as writer/director push him into a kind of madness that is reflected in the main character Willard (Martin Sheen). It is only through force of will that the film is finished. And it is only through that same force that Willard can complete the mission onscreen. Coppola and Willard share an obsession that sees them through unbearable pressures.

One warning. The documentary is rated R primarily due to the footage of a native animal sacrifice scene. While the footage lasts less than a minute it is accurate and somewhat disturbing. You may wish to fast forward through the scene.

Filmed in 1976-77 with additional footage shot in the late 80's, directed and written by Fax Bahr and George Hickenlooper.

Posted by CinemaSteve at 8:57 AM