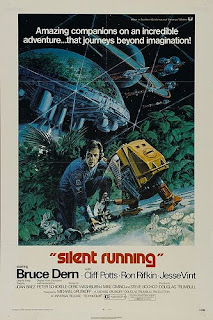 I like this movie. I don't know why. It is fairly cheesy, somewhat preachy, the Joan Baez theme is dated and the story very simple. And yet, I really like Silent Running. Somehow, despite its shortcomings, it strikes a cord with me. I care how the story unfolds and what happens to the characters. If you can look past some minor defects I think you might enjoy Silent Running too. The film has quite a cult following. I guess I belong to that cult.

Bruce Dern portrays an astronaut on a special spaceship that contains the last remnants of plant life on Earth. He has cared for these forests for 8 years as people on Earth have "improved" life back home. There is no poverty, no disease, everyone gets along, it is always 75 degrees and most consider it to be paradise. Not Bruce Dern. He likes trees and flowers and squirrels and real fruit. His fellow astronauts think he is nuts. And he is, at least a little. But when Dern receives an order to destroy the ships, and with it all remaining plant life, he can not proceed. Can he save the forests?

Obviously, this is a metaphor for human destruction of our environment. Worries over the fate of humanity and Earth have run strong for a long time. This is a simple look at one man's desperation to do what he can to save the forests.

The writers include some who went on to fame and fortune. Deric Washburn, Michael Cimino and Stephen Bochco co-wrote the script. Bochco is one of television's biggest producers. His credits include 'LA Law', 'Hill Street Blues', 'NYPD Blue' and many more. Washburn and Cimino wrote 'The Deer Hunter' (a truly great and overpowering film) while Cimino directed 'The Deer Hunter' and the ill-fated 'Heaven's Gate'. That's a lot of chops for one cult sci-fi film. Douglas Trumbull debuts as a director with Silent Running. Best known for his special effects he worked on lots of movies including 'Close Encounters' and '2001'.

Silent Running is not a great film, but I find it to be interesting and appealing. I hope you do as well.

Posted by CinemaSteve at 9:16 AM