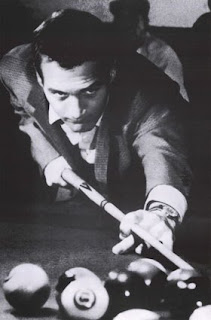 I invited a few friends over to watch this film. None had ever seen it. They were all quite impressed by this hidden gem. Nominated for 4 acting Oscars, Best Picture, Best Director, Best Screenplay and more. The Hustler tells the story of Fast Eddie Felson, pool-hustler extraordinaire. He travels the small-time circuit looking for people to hustle in a game of pool. He is, of course, better than anyone he ever meets. He allows them to win, ups the stakes and takes them for everything they've got. Many of his opponents don't appreciate the treatment. Later he challenges Minnesota Fats to a big-money game. The action between Fast Eddie and Fats is intense and furious.

The atmosphere of pool halls can be felt by the viewer. I can smell the smoke, taste the beer, feel the desperation while I watch. The cinematographer Eugen Shuftan won an academy award. The Hustler also won for art/set direction. Both are well-deserved. However, it is the actors that carry the movie. Paul Newman is stunning. He is Fast Eddie Felson. Both he and fellow nominee Jackie Gleason did all their own pool shots for the film. Piper Laurie, as Fast Eddie's on-off love interest is amazing. I truly feel for her as I watch. George C. Scott, who refused his nomination for best supporting actor, is fantastic as Newman's big backer.

The Hustler is also credited with saving pool in America. The game was being outlawed and run out of many American cities and towns. Pool was thought to be decadent. According to R.A. Dyer's book 'Hustler Days' pool was on its death bed. Then this movie came out and brought pool back into the mainstream. Millions started playing, pool halls opened across the land and the game was saved. Not bad for a movie.

Posted by CinemaSteve at 7:10 AM