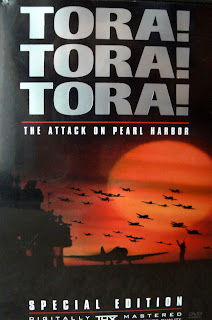 An intense look at the buildup and attack at Pearl Harbor told from both the U.S. and Japan perspectives. Tora! Tora! Tora! is the best film showing the intensity, hardship and action of World War Two. The American story was performed and directed by an American crew, while the Japanese side of the story was done by a Japanese crew. This includes the actors speaking in Japanese. This provides an authentic feel that is missing from many war films.
The sequence that dramatizes the actual attack upon Pearl Harbor is technically awe-inspiring. It is quite dramatic and intense. I am amazed that, even though I know the history, how nervously I view this film. Telling both sides of the story makes this film much more intriguing than the over-the-top treatment given by Michael Bay in his Pearl Harbor.
A very deep cast includes veteran actors Martin Balsam, E.G. Marshall, Soh Yamamura, Eijiro Tono, Jason Robards, James Whitmore and Tatsuya Mihashi. They performed well, but are slightly overshadowed by the technically amazing production values. With an excellent script written, in English, by Larry Forester and, in Japanese, by Hideo Oguni and Ryuzo Kikushima this is the film to see about the Japanese attack on Pearl Harbor and the best film about World War Two.
Filmed in 1970, Directed by Richard Fleischer, Toshio Masuda and Kinji Fukasuka, starring Martin Balsam, Soh Yamamura, Joseph Cotton, Tatsuya Mihashi, E.G. Marshall, Takahiro Tamura, James Whitmore, Eijiro Tono and James Whitmore.
Posted by CinemaSteve at 1:24 PM