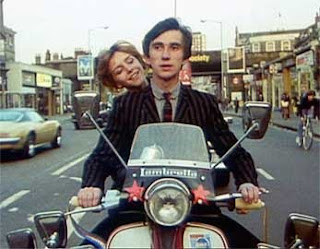 Music by The Who. Acting debut of Sting. Mods vs. Rockers. Music by The Who. Scooters everywhere. The end of innocence. This is a coming of age tale set against the backdrop of early 60's mods/rockers riots in Brighton. Did I mention the music by The Who?

In case you hadn't noticed, I love The Who. The soundtrack and performance footage alone make this film worth seeing. But add to the tunes a wonderful story of a young man trying to find his place in the world. Jobs, girls, drugs, music, scooters. All the choices that, in our own way, we all faced during our turbulent adolescent years.

Director Franc Roddam does a terrific job with this "angry young man" story that is inspired by the Pete Townsend rock opera of the same name. Phil Daniels as Jimmy carries the angst in every scene. I root for him to succeed, find love, mature and enjoy life. For him, as for most young adults, it is a difficult journey. But well worth sharing. For me it was the Punks vs. Rockers in the 70's, but the film's transcendent storyline really strikes home.

Quadrophenia is also the acting debut of Sting. The lead singer of The Police does a terrific job as Ace, the idol of all the mods. He lives and works in Brighton and is a central figure in the second half. I remain impressed with Sting's screen presence. All the actors do fine work. They give this film a very authentic mood.

This is a hidden treasure. The story, the scenery, the scooters and the soundtrack make Quadrophenia a film worth treasuring.

Posted by CinemaSteve at 7:33 AM

Labels: British, Drama, Sting, The Who