This post refers to the 1965 version and not the remake of 2004. However, the remake is one the few remakes I've seen that have been worthwhile, if not up to the original. 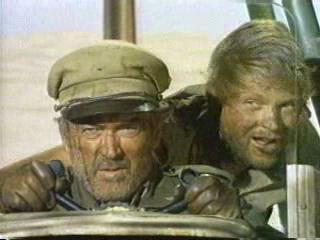 I remember, as a teen and young adult, being excited when I noticed that this would be rerun on television. It was appointment viewing for me. Today, luckily, I can just get the DVD whenever I want to watch this exciting and intriguing film. Jimmy Stewart stars as a pilot working for an oil company in the middle of the desert. He and his crew are flying a group of oil workers back to civilization when the plane experiences difficulties and crash lands. After the crash, the airplane is beyond repair and the survivors must decide upon their course of action. Some want to try to walk out of the desert. Perhaps hundreds of miles to safety. Others want to hunker down and wait for rescue. Still other options are suggested. The final decision on how to survive and escape the oppressive desert is fantastic. I always wondered, each time I viewed this film, what would be my decision? Could I handle the pressure of such a terrible plight?

While my personal reactions aren't in the movie, the script provides for a plethora of personalities. Jimmy Stewart as Towns is his usual strong self. He always demands and deserves attention no matter in what picture he stars. But the story is in the supporting cast. And this film has one of the deepest and finest casts ever assembled. Among the actors are Sir Richard Attenborough, Ernest Borgnine, George Kennedy, Peter Finch, Oscar nominated Ian Bannen and Hardy Kruger. The actors are superb. Difficult situations and hard choices are presented in this story and this cast does them justice. Acclaimed director Robert Aldrich uses the talents of the actors in conjunction with a terrific script by Lukas Heller. Aldrich has done many terrific "guy" movies including 'The Dirty Dozen', 'The Longest Yard' and 'Twilight's Last Gleaming'. He made The Flight of the Phoenix and then rushed to make 'The Dirty Dozen'. Not too bad a double feature of directing!

The script is excellent and avoids most of the survival cliches. Heller adapts Elleston Trevors' terrific first novel with suspenseful results. The fine script allows Director Aldrich to use his excellent cast to make a remarkable film.