Sorry to have been away the last few days. Tax time can be very taxing! 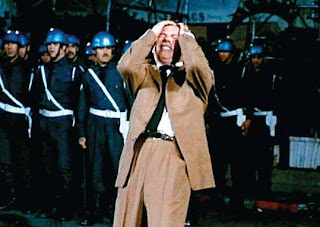 "Any similarities to real persons and events is not coincidental. . . it is intentional."

The emotions for this film are set in the opening moments of Z. That quote sends us off on a voyage of discovery. This movie plays as part historical record and part detective novel. Director Costa-Gavras tells the true story of the assassination of a Greek politician/doctor by thugs hired by the military. Although the film is set in an unnamed country, by opening with the quote above, Costa-Gavras makes clear he is referencing this modern Greek tragedy. Unlike so many film makers who hide behind disclaimers Costa-Gavras challenged the military to sue him for this film. They, wisely, chose not to attempt to silence this intelligent and compelling film.

Occurring in the sixties, Yves Montand portrays a physician who has entered the political arena. He champions the cause of disarmament and peace and an end to repression by the military. A large segment of the population is rallying to his call. The forces within the government are becoming quite uncomfortable with his popularity and they arrange for his public murder. Jean Louis Trintignant plays the magistrate that is in charge of investigating the crime. He is under tremendous pressure to shelter the military from any mention of involvement. But, undeterred, he finds proof of the connections and issues charges against many high-ranking government and military officials.

Z is factually-based on the assassination of Gregoris Lambrakis, a Greek politician, in 1963. The murder and subsequent investigation lead to the downfall of the ruling government, its replacement with a liberal one, which was then ousted by a military coup. 20 years later, the magistrate character, who was revered for his insistence upon the truth and then jailed for that insistence, becomes President of a modern, democratic government. Because this film is so accurate I find it quite compelling. The mystery element is important as a story-telling device, but the facts of the murder, cover-up and long-term effects are what interested me the most. Montand is solid, as usual, but Trintignant's work as the pressured and embattled investigator is fantastic. I find myself emotionally rooting for him to persevere in the face of fantastic opposition from the powerful. I am a sucker for the justice-seeking David vs. corrupt Goliath story. Costa-Gavras, with the aid of the truth, uses that storyline to perfection.

Notes: the letter Z became the rallying graffiti for the movement in Greece after the assassination. Z is the first letter in "Zei", which is ancient Greek for "he is alive". Also, this film was nominated for Best Picture. It won Oscars for best editing and Best Foreign Film.

Filmed in 1969, directed by Costa-Gavras, written by Jorge Semprun and Costa-Gavras, starring Yves Montand, Irene Papas, Jean Louis Trintignant and Jacques Perrin. Based on the novel 'Z' by Vasilis Vasilikos.