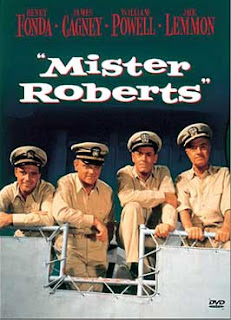 This is a film for everyone who likes movies. Henry Fonda, James Cagney, Jack Lemmon and William Powell. Great Cast! Directed by John Ford and Mervyn LeRoy. Fantastic Directors! Based upon the hit Broadway play written by Joshua Logan and Thomas Heggen. Great Script! All that talent shows up on the screen each time I watch Mister Roberts. It is funny and sad all during the same movie. Many films are called "Dramedy" because they want you to believe that the film is both a comedy and a drama. This is one of the few films that honestly deserves the title. You will be laughing during many scenes and then your heartstrings will be pulled in others.

Mister Roberts is played by Henry Fonda. He is a cargo officer on a supply ship during World War Two. The Captain of the ship, portrayed by James Cagney, is a tyrant who rides the men to their breaking point. None of the men have been off the ship in 14 months. Fonda acts as a buffer between the men and the Captain. Jack Lemmon, in one of his earliest big parts, plays Ensign Pulver. Pulver means well but is quite afraid of the Captain. He has many big plans for upsetting the status on board, but he never seems to follow through. Lemmon won the best supporting actor academy award for this film. William Powell portrays the ship's Doctor and is Fonda's lone confidant. Fonda reprises the role that he originated on Broadway. He won the Tony Award in 1948 for playing Mister Roberts. 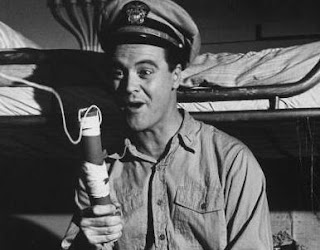 The film follows the battle between Fonda and Cagney, but also shows the boredom and tedium that many people experienced behind the lines in the War. They all served important roles in the fight, but many felt that they had been "left behind". Mister Roberts desperately wants to "get into the war". We recognize the men and women who fight on the front, but often forget all those behind the scenes that carry on as well.

Mister Roberts is highly entertaining. Both funny and dramatic, it will entertain you from start to finish.