Today is Marlon Brando's birthday. I wanted to post some info about his films. I consider him to be America's preeminent actor. Many have seen his films and know much about his enigmatic life. Below are some of my favorite Brando films with links to his work. 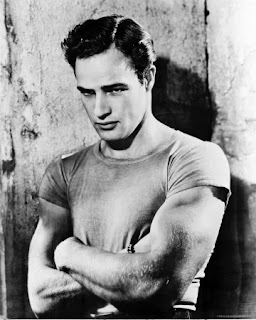 Brando's work as Terry Malloy is the finest piece of acting I have ever witnessed. This is a film that is powerful in its message, but should be seen just to watch Marlon Brando. He won a Best Actor Oscar and this film won Best Picture as well. Budd Schulberg also won the Best Screenplay award. There is a line, towards the end of the film, that is often quoted. Brando says "I coulda been a contender. I coulda been somebody, instead of a bum, which is what I am." Any other actor would have put the emphasis on "been" as the focal point of the line. Instead, Brando forces our attention on "somebody". He wanted to be somebody and through that one choice of emphasis we can feel his pain and anguish. Perfect.

Marlon Brando vs. Lee Marvin as the heads of rival motorcycle gangs who battle in a small town in the 50s. Is any more information necessary?

Marlon Brando portrays a small town, Southern Sheriff on a hot night. Local criminal 'Bubber Reeves' has escaped from prison and the entire town is on edge. This film is best known for its amazing cast. Along with Brando, there is Robert Redford, Jane Fonda, Robert Duvall, E.G. Marshall and Angie Dickinson. Worth a look just for the cast!

Mutiny on the Bounty

Brando plays Fletcher Christian. Christian leads a mutiny on her majesty's ship The Bounty against the domineering Lt. Bligh. Brando portrays Christian unlike any other performer. His Fletcher Christian is more feminine, more emotional and more racked with angst than the portrayals by Clark Gable or Mel Gibson. He shows us that there is more to Fletcher than a man pushed to the edge.

The Godfather: perhaps the film for which he is now best known. Another Best Actor Oscar for his work as 'Vito Corleone'.
Apocalypse Now: Brando dominates the second half as 'Colonel Kurtz'. "The Horror"
A Streetcar named Desire: his breakthrough role. "Stella!"
The Young Lions: Marlon Brando and Montgomery Clift in the same movie, but not seen together. Brando portrays a German officer becoming disillusioned with World War II.
Posted by CinemaSteve at 11:22 AM