Right at Your Door 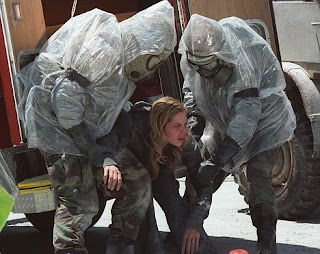 The tagline for this film is "Terror just hit home". A dirty bomb is exploded in downtown Los Angeles. Brad, played well by Rory Cochrane, is at home during the morning of the blast. His wife Lexi, portrayed by 'In Plain Sight' star Mary McCormack is at work in the blast area. Brad can not reach her after the explosion. Understandably, every phone line is down and Brad is panicking. Is she all right? Where is she? The governmental authorities instruct everyone downwind of the blast to use their duct tape and close off their homes. Use plastic sheets and tape up the house. Keep out the radiation and/or germ warfare that the bomb has spread. Reluctantly, since Lexi is still not home, Brad closes off the house. When his wife returns she is covered in debris. Possibly contaminated with radiation or disease. Should he let her back into his safe haven? Would you?

The premise of Right at Your Door should strike a cord in anyone. With the possibility of terrorist attack in all of our lives, our response to such an intense situation is something to consider. How far does someone go to protect themselves and their families? Both Rory Cochrane and Mary McCormack do fine jobs within the characters. They come across as real people faced with an unreal world. The film was written and directed by Chris Gorak. Earlier in his career Gorak served as the art director on some big Hollywood films like 'Tombstone', 'Fight Club' and 'Minority Report'. Some of that attention to detail shows in his direction of this movie. 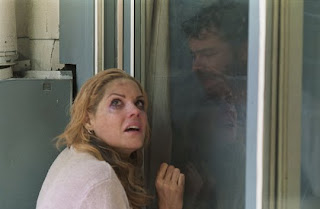 But with this being his first directorial work he occasionally sets up the photographic part of the movie at the expense of the story. Some of the visual images are striking. The images of dust-covered survivors is haunting. However, the most jaw-dropping moments in this film come at the end. I will not say how the film ends, but it is most definitely a powerful twist. This film is worth watching just for the ending.

Right at Your Door is an intriguing plot with a fantastic finish. The acting from the leads is solid and the film is visually appealing. It is not the best movie I have ever seen, but I enjoyed most of it. Especially the final minutes. Wow!