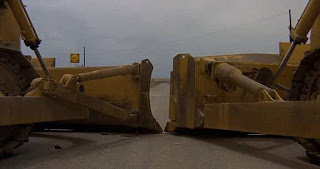 The late 1960s and early 1970s saw the evolution of the car chase in cinema. Chase cinema evolved from films like 'Bullitt' (my post) and 'The French Connection', which used car chases to develop tension and continue the drama, to later films, like 'Gone in 60 Seconds' and 'Dirty Mary, Crazy Larry' (my post) in which the car chase was the drama and the story was just to get to the action. Some of the biggest directors of today got their start on just such films. Oscar winner Ron Howard started with 'Grand Theft Auto' while multi-Oscar winner Steven Spielberg first directed 'Duel' (my post). They may be making much more cerebral cinema today, but, as young directors, they loved a great car chase! I find that car chase films offer film makers the opportunity to discuss the classic individual vs. society storyline. The driver wants to be free to travel as they wish while the police want them give up their freedom and obey the rules. That is a plot, in one form or another, that goes back as long as stories have been told.

Vanishing Point is from the later group of car chase movies. The storyline is to get us interested in the characters, but the action of the automobiles is what keeps us watching. In this case, it is a 1970 supercharged Dodge Challenger. Barry Newman plays Kowalski, a former cop who has fallen upon hard times. Through a series of short flashbacks, we learn that he was a decorated war hero and police officer who was removed from law enforcement and tried to make a living racing cars. After a personal tragedy his driving career fails and he turns to delivering cars from one city to another. It is on such a trip, from Denver to San Francisco, that our story unfolds. 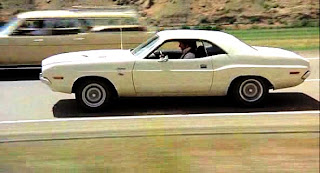 He meets many characters along the way. This movie being made in 1971, those characters include hippies, racist cops, drop-outs, motorheads, faith healers and a large assortment of the 60s crowd. Clevon Little, of 'Blazing Saddles' fame, stars as 'Super Soul'. He is the dj of a Nevada radio station who deeply empathizes with Kowalski. He is doing his best to assist our driver as he attempts to allude police on a four state chase. One advantage to having a radio dj in the film in the opportunity to include some great soul music. The soundtrack alone makes this a film worth enjoying. 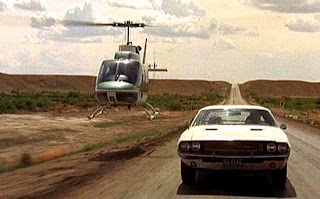 I will not spoil it with details, but film aficionados have been debating the ending since the premiere. I find it to be a fantastic climax while others complain and offer alternate endings. Car chase films have but two possible endings. One, the driver, our hero, escapes the police and goes on to drive another day. Or two, the police, the symbol for the end to freedom in our lives, stop the car from proceeding and imprison the driver. I won't tell you which ending Vanishing Point has, but, after viewing, drop me a line and tell me what you think. stevethemovieguy@gmail.com. I look forward to your opinion.

This is one of the classic car chase films. Remember that this was made before computers took over movies. All the driving, crashing, jumping and more was done by real people in real cars. Oh how I long for the days of stunt people!

Posted by CinemaSteve at 5:00 PM