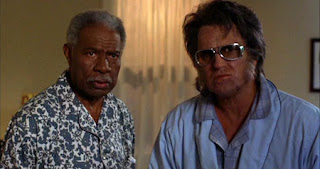 Plot: Elvis did not die. He is a resident of a retirement community in East Texas. JFK did not die. He also is a resident of the same community. A 3,000 year old zombie has come back to life and is sucking the souls out of some of the other residents of this senior living facility. The mummy has chosen to feed here because "he didn't think anyone would notice" if the residents disappeared. Elvis and JFK team-up to battle the cowboy-zombie-mummy to save the seniors from having their souls sucked out their own asses. The film rises to a crescendo near the end as these titans of history battle to protect the senior citizens' lives.

Obviously, this is meant to be a comedy/horror/cheesy flick. Bruce Campbell portrays the aging Elvis to perfection. He is both sincere and over-the-top simultaneously. Campbell has quite a cult following. He is terrific here. The "old" Elvis, complete with sequins and karate kick, is a part that many actors would shun. But Campbell pulls it off with heart and schlock in evidence. Ossie Davis plays President John F. Kennedy. As many of you know, Ossie Davis is black. You have to watch the film just to hear him explain how JFK was not assassinated and why he is now black. Hilarious! 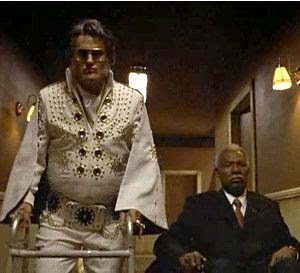 Bubba Ho-tep was written and directed by Don Coscarelli. He is best known for the 'Phantasm' series of horror films and for the original 'Beastmaster' movie. This film is a difficult task. It must be campy and over-the-top, but should avoid being "too much" of either of those. He does a fine job. The pacing of the film is a little slow, but since the stars are senior citizens battling a 3,000 year old mummy slow applies. The film is full of quick jokes. They range from the cerebral to the outhouse. I am sure there is something to offend anyone. The sound effect when the mummy sucks the soul out of someone's ass still makes me cringe. You have been warned.