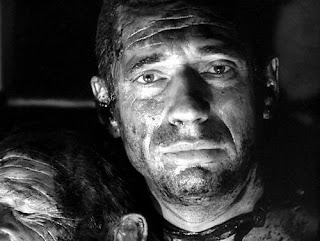 Sorcerer is William Friedkin's remake. He was fresh off 'The French Connection' and 'The Exorcist' so the studios gave him anything he wanted. It shows. Roy Scheider does a nice job reprising the Yves Montand role. Friedkin goes a little overboard in the first half, but the remainder of the film is just as intense as Wages of Fear. The shot of the trucks driving over rope bridges in a pouring rain is worth the price of admission. The Tangerine Dream soundtrack is quite wild. 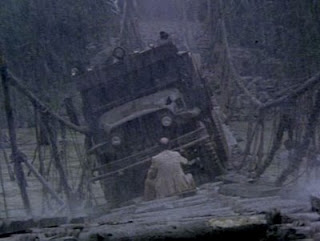 Wages of Fear was filmed in 1952, directed by Henri-Georges Clouzot, written by Clouzot and Jerome Geronimi, starring Yves Montand, Charles Vanel, Folco Lulli and Peter Van Eyck. It is about half sub-titled and half in English.

Notes: Before Wages of Fear could be released in the U.S. government censors order some key scenes removed. They felt it was "anti-American". Wages of Fear was the first film to win the Golden Palm at Cannes and the Golden Bear in Berlin. In Sorcerer, the part of Donnelly the head of the gang that robs the church is played by Gerard Murphy. Murphy was an ex-convict who had committed a similar robbery just block from where the scene was shot. The magnificent sequence of the trucks on the bridge cost millions of dollars and took three months to complete.