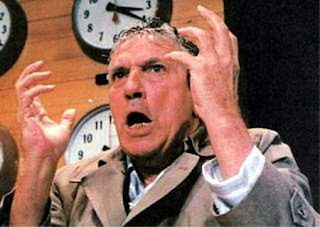 "I'm mad as hell and I'm not going to take it anymore!" For everyone who has seen Network that line comes quickly to mind. Peter Finch's portrayal of mad prophet Howard Beale was amazing. His representation of a television news anchor gone over the edge earned him an Academy Award. The range of emotion from angst to anger to disillusionment was fantastic. He was awarded the Best Actor Award posthumously.

But, for me, the most amazing thing happens when you view it today. When it came out (1976) Network struck a chord with Americans. We were in the middle of an oil crisis, still reeling from Watergate and Nixon, and Vietnam was fresh on our minds. And the film gave voice to those insecurities and angers. But now, almost 35 years later, the portrayal of television is the most poignant part of Paddy Chayefsky's script. In the film, anchorman Howard Beale uses the news broadcast to opine upon his opinions and personal feelings. He reminds me of current anchors like Keith Olberman or Bill O'Reilly. They seem more interested in convincing the viewer that they are right than in providing accurate information. That wasn't true when this movie was released. But Chayefsky was sure that ratings and personality would take over and they have. Instead of Walter Cronkite we have Katie Couric. The likes of FOX, MSNBC and others use their "bully pulpit" to ferment a fever that keeps the viewers coming back. 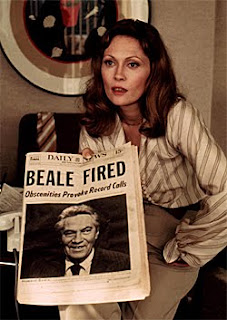 From an entertainment viewpoint this film is outstanding. Network won 4 Oscars including Best Actor, Actress and Supporting Actress. This was only the second time that one film won 3 of the 4 acting Oscars, joining 'A Streetcar Named Desire'. Screenwriter Paddy Chayefsky also won for Best Screenplay. It was his third Oscar. While the acting is top-notch it is the script that carries this film to its great heights. The points that Chayefsky makes about the power of media and the lack of accountability within television are more important today than ever. His "prediction" of a network that appeals to a different audience looks eerie in retrospect with the later success of Fox.

This film tells the story of a failing television network. William Holden is the head of the money-losing news division. Robert Duvall comes in to take over the network and make it profitable. He hires Faye Dunaway. She decides to "program" the news and make it more exciting and entertaining. This leads to anchorman Peter Finch becoming the superstar of the UBS network. Ratings go ever higher as the network sinks lower into the muck. Stay through to the end. When ratings begin to slip Duvall and Dunaway hatch the most amazing event in television history to inspire ratings! 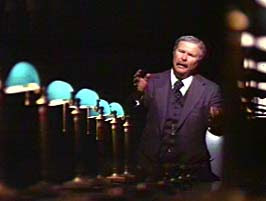 Network is powerful. Strong directing, a great script and terrific performances make this an important and entertaining film. Netflix it today!