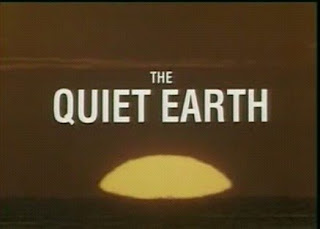 The Quiet Earth is an independent film made in New Zealand. Small budget, large effect. I guarantee that after viewing this film you will have questions. It is odd, thought provoking, unique and different. Those are traits that I often enjoy in a film. This is NOT your typical Hollywood movie nor does it have a Hollywood ending. In fact, after you watch the movie, place a comment and let me know what you think. I have talked to other viewers and everyone has a different opinion. I would love to know yours.

With a cast of only 3, director Geoff Murphy uses image, lighting and mood to tell much of the story. Bruno Lawrence plays Zac Hobson. In the opening scene Zac awakens to find that every living thing on Earth has disappeared. All the people, animals and insects are gone. What would you do in a situation like that? Zac goes through many stages before deciding to find out what happened. We come to find that he worked for a secret research facility that was doing work on an energy grid that surrounds the Earth. Did he cause this to happen? And can it be reversed?

Besides doing research he is longing for companionship. Anyone with whom he can share his new life and new world. Are there others who survived? He eventually meets Joanne (Alison Routlidge). They work together to search for others while Zac secretly works on a possible reversal. 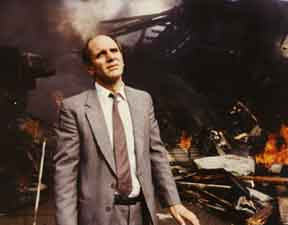 The script, written by Bill Baer, Bruno Lawrence and Sam Pillsbury, raises many more questions than it answers. The Quiet Earth is not perfect. The writers obviously had trouble with the ending. Some find it mystical, some frustrating, others incomprehensible. If you are looking for a film that wraps everything up neatly you should avoid The Quiet Earth. If, however, you want to be challenged this may be for you!

Filmed in 1985, directed by Geoff Murphy, written by Bill Baer, Bruno Lawrence and Sam Pillsbury, starring Bruno Lawrence and Alison Routlidge. Based on the novel by Craig Harrison. By the way, if you ever see the book in a thrift store, pick it up and give it to me. It is quite valuable!